Ash Trees in NC Under Attack by New Pest

Find this article at:
go.ncsu.edu/readext?375222
— Written By Charlotte Glen 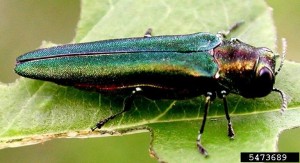 As of Sept. 10, the North Carolina Department of Agriculture has declared the entire state of North Carolina under quarantine for emerald ash borer, an invasive insect pest first discovered in the United States near Detroit, Michigan in 2002.

It has since been responsible for the death of tens of millions of ash trees (Fraxinus spp.) in northeastern and north central states. Over the past year, emerald ash borer has been discovered in several North Carolina counties, including counties in the western, central and eastern parts of the state, leading to the expanded quarantine. Learning how to identify ash trees and the signs of borer infestation will help you make sound decisions regarding this devastating pest.

What Is Emerald Ash Borer?

Emerald ash borer (EAB) is a non-native invasive insect indigenous to China, Japan, Korea, and parts of eastern Russia. Adult EAB’s are metallic green beetles, but it is the immature beetle, or larvae, that are so destructive to ash trees. EAB larvae bore into ash trees, feeding on tissues beneath the bark, typically killing the tree within a few years of the initial infestation. EAB is believed to have been transported to the United States in wood packing materials made of ash.

Which Trees Are Attacked? 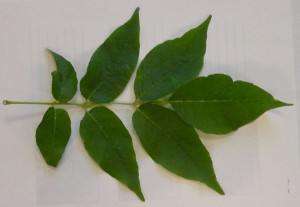 Ash leaves are pinnately compound. This means a single ash tree leaf is composed of several leaflets connected to a slender stem. Image courtesy of Michigan Department of Agriculture, Bugwood.org

Emerald ash borer attack species of Fraxinus, commonly known as ash. Ash trees are large shade trees that can be identified by their pinnately compound leaves, which are similar in shape to pecan and hickory leaves. One feature that differentiates ash trees from other species with pinnately compound leaves is that their leaves are arranged opposite of each other on the stem, rather than alternate as they are on pecan and hickory.

Four species of Fraxinus are native to North Carolina:

While green and white ash are occasionally planted as landscape trees in North Carolina, Carolina and pumpkin ash are limited to natural areas and woodlands. Ash trees have not been planted nearly as frequently in NC landscapes as they have in states such as Ohio, Illinois and Michigan, where urban forest devastation due to this pest has been severe.

It has recently been discovered that emerald ash borer is also able to attack American fringetree, Chionanthus virginicus, a small native tree related to ash that has become popular in landscapes. See images of this tree. Read more about these findings on the ecoipm blog maintained by Dr. Steve Frank, NC State Extension entomology specialist.

Attacks on native species other than Fraxinus and Chionanthus are highly unlikely, though species that are closely related to ash may be more susceptible. Ash belongs to the plant family, Oleaceae. Outside of Fraxinus species and Chionanthus , the only other plants in this family that are native to NC are eastern swamp privet, Forestiera acuminata, and wild olive, also known as devilwood, Osmanthus americana.

Ash leaves are arranged directly opposite of each other on the stem. Hickory and pecan have an alternate leaf arrangement. Image courtesy of Paul Wray, Iowa State University, Bugwood.org.

To learn more about tree identification and tree species native to NC, download Common Forest Trees of NC and How to Know Them, a free NC Forest Service publication.

What Can Be Done?

Land owners, gardeners, and grounds managers across NC should be on the lookout for signs and symptoms of EAB infestation in ash trees. These include:

Home and landowners are encouraged to report any symptomatic activity in ash trees to the NCDA&CS Plant Industry Division hotline at 1-800-206-9333 or by email at newpest@ncagr.gov, or by contacting their local N.C. Forest Service County Ranger. Find your county ranger. Rangers can also suggest treatment options for homeowners.

Wood boring pests such as EAB are most commonly spread over long distances through firewood transportation. Minimize the spread of this pest by using only local firewood or wood that has been debarked, heat treated and inspected. According to the NC Forest Service, a good rule of thumb is to burn firewood within 50 miles of where it was cut.

Little can be done to protect ash trees in forests. High value trees in prominent landscape areas can be protected IF insecticides are applied early in the infestation. EAB is expected to become established throughout NC. Any trees treated with insecticides will need to be re-treated on an annual basis to maintain protection. Before a treatment program is started, home owners and landscape managers are urged to consider which is more sustainable in the long term: annual pesticide applications to protect an ash tree from a reoccurring pest OR replacing the tree with a species such as oak that is not susceptible to this pest.

New plantings of ash trees are not recommended as trees are likely to succumb to this pest over the next several years. Incidences like this emphasize the urgent need for greater diversity in our landscapes. As with EAB, most insect pests and plant diseases have a very narrow range of host species. While pests like EAB may be deadly to their host, they are not capable of attacking a wide range of species. Planting many different species and varieties of plants is our best defense against future pest outbreaks and epidemics.

Where is emerald ash borer in NC?

What does it mean to be under quarantine?

Report any symptomatic activity in ash trees to the NCDA&CS Plant Industry Division hotline at 1-800-206-9333 or by email at newpest@ncagr.gov.

Use Extension Search to find research based information from Cooperative Extension systems across the U.S.

Subscribe to the Chatham Gardener email list to receive timely updates on sustainable lawn, garden, and landscape care for the central NC Piedmont.

We also have a few other email lists you can subscribe to.