Chatham County Center will be closed tomorrow, Thu 11/26/2020 for the holiday. Due to a cyber incident, county email and phones are inoperable for an undetermined amount of time; the office remains closed to the public.

Find this article at:
go.ncsu.edu/readext?314772
— Written By Charlotte Glen 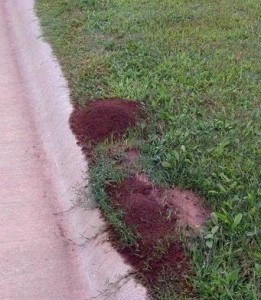 Red Imported Fire Ant (RIFA), Solenopsis invicta, is an invasive species first introduced into the United States in the 1930’s from South America. RIFA have infested 330 million acres in the southern U.S., and are currently found in much of the NC piedmont and coastal plain. The Global Invasive Species Database categorizes red important fire ant as one of the 100 worst invasive alien species due to their impact on humans, pets, livestock, and wildlife. According to the U.S. Department of Agriculture, seven billion dollars are spent each year in the U.S. on medical expenses, damage repairs, and control efforts as a result of RIFA.

If you need to control fire ants this fall, consider using baits. Baits are the most environmentally friendly fire ant control product and are particularly effective when applied in fall (Sept-Oct) because fire ants are actively foraging at this time. Baits containing organic ingredients as well as synthetic are available, but all must be used correctly to work. Tips for using baits successfully include:

To learn more about controlling red imported fire ants, review the slides from a class held at the Chatham County Center of N.C. Cooperative Extension on Sept. 4, 2014. The slides, along with links to recorded webinars, publications and other Extension resources, are posted online here: http://chatham.ces.ncsu.edu/fire-ant-resources/