UPDATE: Community members are encouraged to continue to reach out to Extension professionals for technical assistance via EMAIL and PHONE.

Find this article at:
go.ncsu.edu/readext?614928
— Written By Tiffany Hancock and last updated by Debbie Roos 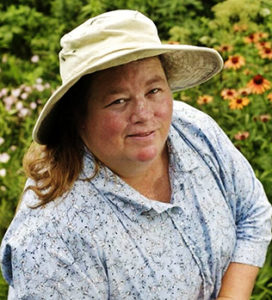 CHATHAM COUNTY, NC —   The North Carolina Wildlife Federation has announced that the list of winners of the 56th Annual Governor’s Conservation Achievement Awards includes Extension agent Debbie Roos, who will receive the statewide Wildlife Conservationist of the Year Award.

The award, which will be presented in September, recognizes Roos for her support of small farmers in the area and hosting educational seminars and field days on sustainable agriculture. The group added, “In her early work to support beekeepers, Roos became aware of the more than 500 native bee species in the state, changing her career trajectory. Her position has grown to include support for the wider audience of gardening and wildlife enthusiasts, which culminated in the establishment of the Pollinator Paradise Garden in Chatham County.”

Roos serves as the Sustainable Agriculture and Organic Production Extension Agent for the N.C. Cooperative Extension, Chatham County Center. Based in Pittsboro, Roos celebrated 20 years of service with NC State University in May 2019.

According to the North Carolina Wildlife Federation, the 2019 winners are “exceedingly notable conservation devotees who work for wildlife, habitat, and those who cherish natural resources. They are land stewardship champions, water advocates, and leaders in the preservation of unique ecosystems. The award winners include agency professionals, elected officials, dedicated volunteers and organizations rising to the challenge.”

Award winners are nominated by the citizens of North Carolina and decided upon by a committee of scientists, environmental educators, and conservation activists.

The state’s Wildlife Federation first presented its conservation awards in 1958. “Each year we are amazed at the commitment and creativity of North Carolina citizens in protecting wildlife and wild places,” said Awards Committee Chairman T. Edward Nickens. “Many of our award winners tell us their Governor’s Conservation Achievement Award represents the high point of their career, whether they are full-time scientists or full-time volunteer conservationists.”

These awards are the highest natural resource honors given in the state, with the goal of inspiring all North Carolinians to take a more active role in protecting the natural resources of our state.