Chatham County Center will be closed today, 01/18/2021 for the holiday. Due to a cyber incident, Chatham County email/phones are inoperable at this time; the office remains closed to walk-in traffic.

The Science and Art of Pruning 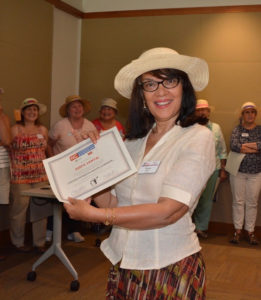 There are a lot of good reasons you might prune a plant—to manage plant growth, improve its aesthetics, and encourage flowering and fruit production are some. Pruning is not strictly necessary—no plant necessarily dies from a lack of pruning and if you are happy with your shrub’s looks and performance, there is no need to prune it. Should you decide to prune, when and how should you prune? There are two main principles to keep in mind if you are pruning—to encourage growth and flower or fruit production.

Apical Dominance is the phenomenon that impels plants to grow upward driven by the hormone producing terminal bud that prevents the buds below it from growing. When you remove the terminal bud, the lower buds are released. Thus, pruning stimulates a lot of new growth as multiple buds take over the job that just one single bud was doing previously.

Bloom Time—Old Wood or New Wood. You need to understand your plant’s bloom cycle—that is, if your shrub flowers on new wood or old wood to know the best pruning times and techniques.

Flowering on new wood means that a plant does not create flower buds until after growth begins in spring and typically flowers later in the growing season. Therefore, it can be pruned in early spring just as the new growth begins. Examples of plants that flower on new wood include:

Beautyberry (Callicarpa americana) produces flowers in summer and fruits in fall and  should be pruned in the spring and winter using a rejuvenation cut, and in the fall using a thinning cut.

Flowering on old wood means that a plant forms the flower buds for next year’s blooms during the current year.  Plants flower on old wood typically in mid to late summer and can be pruned immediately after they finish flowering. Examples of plants that flower on old wood include oakleaf hydrangea and flowering quince and should be pruned as follows:

Oakleaf Hydrangea (Hydrangea quercifolia) produces flowers in spring–summer and should be pruned in spring and summer using thinning and deadheading cuts.

Flowering Quinces (Chaenomeles spp.) produces flowers late winter-early spring and fruit in summer–fall and should be pruned in the spring and summer using thinning and rejuvenation 3 cuts.

Pruning also requires that it be done properly—proper timing, proper location of the cut, and proper technique are all critical to plant health. You can safely remove up-to one-third of the plant’s growth at any one time—one-third of its branches or height but not both. Cut back each stem to a big, healthy bud and make straight, not slanted cuts to minimize exposed area.

More tips on pruning a variety of deciduous, evergreen, broadleaf, and needled shrubs and trees in the Southeast can be found in the NC State Extension publication How to Prune Specific Plants.